LEDs, or light-emitting diodes, are known to use energy more efficiently that fluorescent or incandescent bulbs. They produce little heat and are longer lasting. But there are some lingering ideas about LEDs, and we did some digging to find out – fact, or fiction? 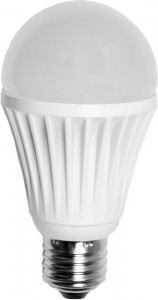 Fiction! LED bulbs may seem expensive up front, but it’s important to consider their extensive lifespan and long-term savings. The electricity used by an incandescent bulb costs up to 10 times the purchase price of the bulb itself, according to sustainable living experts at EarthEasy.com. Need more proof? Consider this, from Forbes Magazine: “Several manufacturers sell $20 LED bulbs that put out as much light as a 60-watt incandescent. $20! Yes, but that bulb will shave $10 off your utility bill a year and last until 2025 or longer. You’ll make over $100 in the long run.” You’re actually saving money by using them.

They don’t save power.

Fiction! Actually, LED bulbs use about 20 percent the amount of electricity as traditional bulbs, as stated in the NY Times article “LED Bulbs Save Substantial Energy, a Study Finds.” You save on expenses and resources.

They don’t produce as much heat as fluorescent or incandescent bulbs.

Fact! And that’s a good thing. Energy Star confirms that LEDs are not hot to the touch, so you won’t burn your hand if you accidentally touch a bulb. This also makes LEDs less of a fire hazard, and they don’t contribute to the heat you have to manage in warmer, summer months.

All LED lights are harsh.

LED bulbs have come a long way, and advances are still being made. They’re not all harsh, glaring and cold; they can even be inviting and romantic, say the technology gurus at Tech News Daily and GizMag.com. LED light is also said to be safer and healthier, without UV rays, reports MyLEDLightingGuide.com. Select a warm white or soft white bulb for a more relaxing feel, or put them on a dimmer.

Being energy efficient by using LEDs is time consuming.

Fiction! They’re durable, last longer and are very quiet, according to green initiatives blog MakeMySpaceGreen.com. You won’t even notice they’re there!